Well its finally complete, my VT has been engine treated, 6000 mi. ran in, and turbo treated, 6500 miles ran in. 7500 mi. can around, the "carrier" Motul which had served me well ( I'm a fan Cermatreatment.com), was scheduled to come out and be replaced BY CERMA oil 5w40. As I did my oil change I noticed something about the dipstick I have noticed before. There was a "coating" on the entire portion of the stick which swims in the oil in the oil pan. What was really interesting about this coating? I could not scrape it off.

And its nature was extremely SLIPPERY to the touch with one’s finger coated in oil. It was remarkably more "slippery" than the portion of the dipstick which was uncoated. CERMA TREATMENT binds to wherever there is heat and or friction. CARBON CAN NEVER STICK TO A CERMA TREATED SURFACE. (YES our dirty GDI's no more build up). The oil makes carbon bind to itself rendering it salvageable in size for out filter media.

The inventor of CERMA had explained to me that the CERMA engine treatment would treat the ferrous metal innards of the ENTIRE inside of the engine for its LIFE!! The NANO CERMA would treat the bushings of the turbo and any other non-ferrous components in the oil circulate.

Now I had evidence in front of my face that I could relate to. Notice the two zones on the dipstick, the yellow is coated, the blue is not. The engine treatment in NEW cars only use 1 oz. of each they require "dirty" oil to carry them. The run in period for each is a minimum of 3,000 miles. I did 4500, before I changed the oil over to CERMA oil.

The oil, YES I bought a 5 gallon drum, was 99.00. YES it’s a approved MINIMUM class 5 lubricant. The standard ratings don't do it justice. IT’S OFF THE STANDARDIZED CHARTS. Will not breakdown in any fashion to around 1100 degrees.

According to the inventor, over the next 90 days my VT will undergo fine changes, all positive: Increased compression, Yes a POWER mod in an oil change...BAM!! Increased gas mileage, of course Treated surfaces will "conduct and transfer heat more efficiently" There are many YouTube videos on all its properties.

For you technically adept and doubting just call the technical support line.(239-344-9861 www.cermatreatment.com 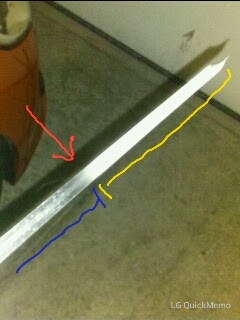 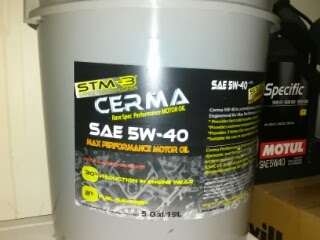